Depression, Anxiety, and Panic Attacks - There is no SHAME, you're not alone

Mark 14:32-34 They came to an area called Gethsemane. Jesus told his disciples, “Sit here while I pray.” He took Peter, James, and John with him. He plunged into a sinkhole of dreadful agony. He told them, “I feel bad enough right now to die. Stay here and keep vigil with me.”

Jesus probably suffered anxiety just like we all do sometimes. Depression, Anxiety, and Panic Attacks! He was God in a “human body”. Many times as Believers and NON Believers, we don’t want to recognize that the brain is actually just another organ in the body that needs special attention to maintain good mental health. Sometimes even medicine!

Though the Bible doesn’t use the word “depression” except in a few translations and verses, it’s often referenced by other similar words, such as “downcast,” “brokenhearted,” “troubled,” “miserable,” “despairing,” and “mourning,” among others. Throughout the Word, there are a number of stories about godly, influential men and women of faith, who struggled and battled through dark times of hopelessness and depression. Many of us may find ourselves struggling there today. But we don’t have to stay stuck there. There’s hope.

Our brain is not our spirit or our soul. It's a great big supercomputer organ, that God created to house our thoughts, make decisions, and send signals to our body using our central nervous system as a highway to do things like tell our heart to beat. Or to digest food.  If your liver started giving you medical problems, you would get prayer, and see a Doctor. Probably even take some medicines and change some eating habits.

1 Corinthians 6:19 "Do you not know that your bodies are temples of the Holy Spirit, who is in you, whom you have received from God? You are not your own; 20 you were bought at a price. Therefore honor God with your bodies."

The brain is no different than any other vital organ in our body. It runs on chemicals and electrical impulses to do just about everything. From time to time, it gets tired or overworked. Or sometimes you may just have a lot come at you all at once and you get anxiety or panic. Its does what it is supposed to do.

Fight or Flight - Our bodies are created to be survivors. If we find ourselves in a situation that is life threatening, or just annoying, our brains create chemicals to make us either FIGHT, or flee.  That's the way God planned it. That's why God want it to be. Don’t ask me, ask HIM why. Sometimes we get stuck in the middle of fight or flight and we can't make a decision that is positive or helpful. That is a panic or anxiety attack. If we can't get help fast, depression sets in.

NOW I FIGHT! For the promises of God in my life and to live a Kingdom Life.

Jesus was faced with certain death and persecution. He knew he could not run or “flight”, because His death was God's plan for us to all be able to be saved from sin. So the scriptures tell us that “He plunged into a sinkhole of dreadful agony. He told them, “I feel bad enough right now to die.”  Sound familiar to anyone out there???

Now to anyone who has been there, that is a classic panic or anxiety attack. There is NO SHAME in having “mental illness”. We are designed to only process so much and sometimes we get overwhelmed by this world's problem, and the chemical imbalance starts. And we live in a much different world today with wars, rumors of wars, terrible physical health due to terrible nutritional habits, and so forth.

Depression and anxiety are not just a mind over matter issue. They are real chemical imbalances in the organ called the brain. Just like if you get pancreatitis. It needs some TLC to get it fixed. Sometimes just rest and relaxation, other times more aggressive treatment plans to get back on track.

Now we have all been there or know someone who is suffering. I have many times over the years. The last thing I needed was someone telling me put my mind above it. If Jesus needed Peter, James, and John to be with Him as He went thru such an attack on Him, why wouldn't we all want someone around to support us during these times. There is NO SHAME.

Now I know that some people are going to disagree with me about this. And you are the people who I am writing to. Stop with the negative comments and thoughts about that person's depression and pray with them. Just be there. Anything, but don’t be negative to them. It’s not something they chose and condemnation only makes it worse.

Here are seven things you should never say to someone who is suffering from depression: 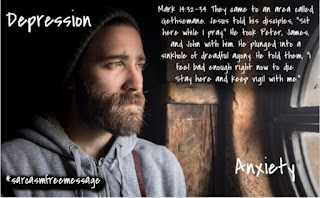