Why Would God Lead Us Into Temptation Anyways?

For the past several weeks the Lord’s prayer has been going through my head. I get to the part “lead us not into temptation”, and I have to pause. Why would God lead us into temptation in the first place???

“King James did not rewrite the Bible. James I commissioned a new translation of the Bible which was completed in 1611. James himself was not involved, the translation was done by 47 church of England scholars. It was probably not even called the King James Bible for around a century after its completion.”    Google Search

So it brings me to the question, “Why would God LEAD us into temptation, causing us to have to pray that he doesn't.

Psalm 37:23 “The LORD directs the steps of the godly. He delights in every detail of their lives.

Psalm 37:24 “Though they stumble, they will never fall,for the LORD holds them by the hand.

This is just my opinion but I think it holds true. The Lord’s Prayer is a roadmap on “how” to pray. We serve a God that orders our steps, and delights in every detail of them. Why would he ever lead us into temptation. Somewhere in the King James Translation, the real meaning of this has been lost.

I have recently started praying …..

“Lord, lead me “away” from temptation.”

I know it may seem petty or no big deal, but as we grow in our relationship with Christ, we really need to know,

- know His plans for our future

7-13 “The world is full of so-called prayer warriors who are prayer-ignorant. They’re full of formulas and programs and advice, peddling techniques for getting what you want from God. Don’t fall for that nonsense. This is your Father you are dealing with, and he knows better than you what you need. With a God like this loving you, you can pray very simply. Like this:

Our Father in heaven,

Reveal who you are.

as above, so below.

Keep us forgiven with you and forgiving others.

Keep us safe from ourselves and the Devil.

You can do anything you want! 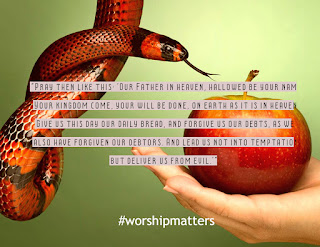